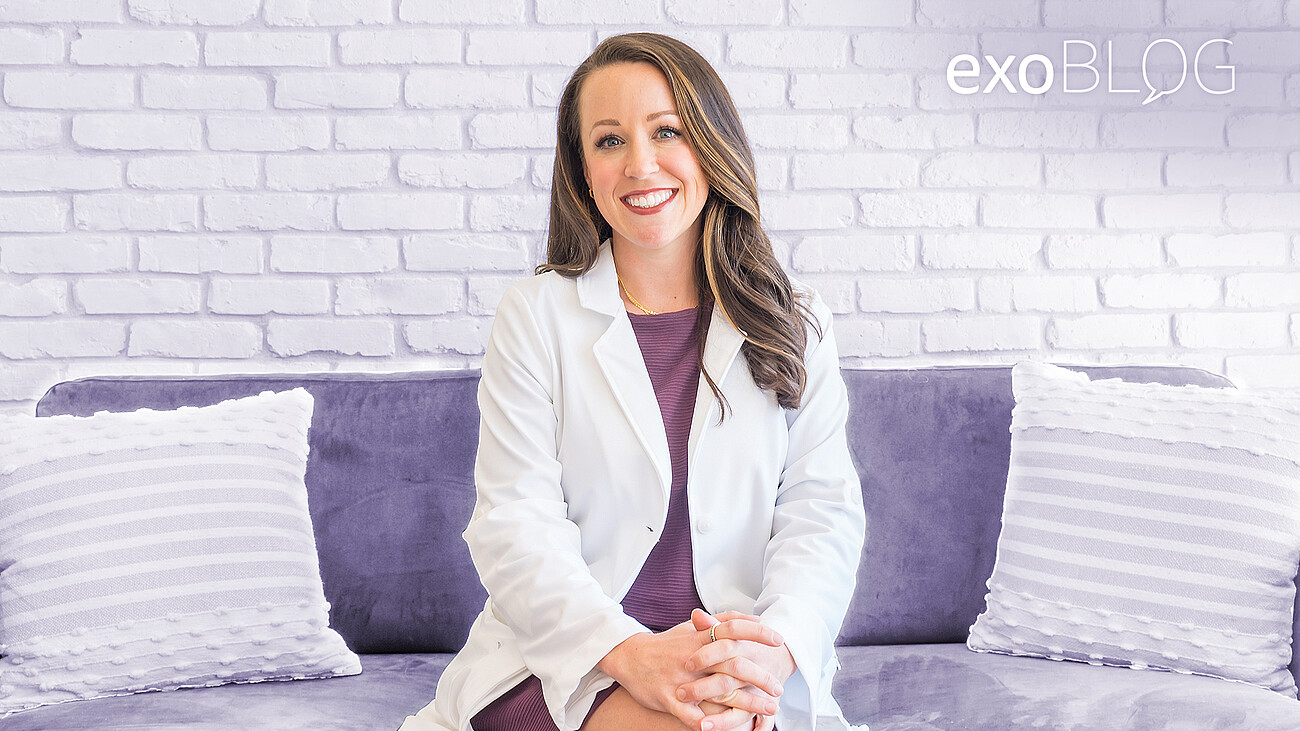 Top tips from a digital newcomer

Dr. Christina Pruitt decided to become a dentist after watching her uncle, also a dentist, rebuild someone’s front tooth. “This is probably in hindsight why I like cosmetic dentistry so much,” she says. “Because I realized I could work with my hands and combine healthcare with art.” Since that moment in her uncle’s office, she’s pursued dentistry through school, the Air Force, as an associate, and finally, by opening her own practice in Omaha, Nebraska, last March. She feels “a little later to the game than some,” but is making up for lost time by learning new tools to improve patient care.

We caught up with Chrissy to get her impressions as someone still new to exocad software.

Q: Tell us about your initial steps into digital dentistry? What first captured your interest?

A: My husband is an oral surgeon, and he was doing this concept in oral surgery where they would do the iTero scanning. That's where I was really introduced to intraoral scanning. I started scanning implants for impression making at that point and that led to Invisalign. That was probably my initial jump into it.

Q: Then you ran into Dr. Diana Tadros, right? She’s one of our exocad “Aces.”

A: I was at my last class at the Kois Center for advance treatment planning when I met Diana. We were walking out the last day, and I started talking to her about American Academy of Cosmetic Dentistry (AACD) accreditation, which I was doing, and she's finished now. Her intro to the class was to present what she’s doing with exocad. I decided right then to talk to her because she is super cool and has a ton of knowledge. I got to know Diana, then went to her exocad elite course and here we are. It was definitely because of her that I got involved with exocad.

Q: What was the training like? What kind of skills did you gain? Because a lot of people are wondering, what first steps to take to get started with digital dentistry and smile design.

A: I was working in Omaha, Nebraska at a high-end cosmetic practice. We were doing a lot of wax-ups and outsourcing a lot of them. I saw the cost, what was involved and how much time it took. I think once I realized that I could do that quickly and inexpensively myself with exocad, I really took to the software. That's primarily what I use DentalCAD for now. I know it can do so much more, but I am totally busy with everything that new practice ownership involves. For me, it's really my digital design and wax-up tool. I've seen Diana do flippers, and I think that's really cool. I’d like to start printing shell temporaries too, but I'm primarily using it just for my comprehensive cosmetic cases at this point. I also have the Model Creator module. I use it exclusively to make my models for 3D printing.

I thought, wow, I have been doing this for two days, and this has already resulted in a very big ‘yes’ from one of my patients.

Q: Is there anything that you wish you'd known before adopting digital workflows? If colleagues came to you and wanted some advice, what would you tell them?

A: I would tell them that it takes time at first. You know, we do digital to save time. So in your mind, you think this is supposed to make my life simpler and faster because I'm not sitting in front of a wax-up for hours, but that is not always the case at first. I think anyone entering it has to realize that there are some people who know everything about the technology and can sit down and do a design in seconds. It's probably going to take you longer than that. Eventually it does save time, and there’s a lot of value to having that tool and being able to show patients their digital designs. It’s totally different than showing them a wax-up.

Q: Speaking of patients, how does the digital aspect of what you do influence the communication with them?

A: I designed a case at Diana's course. Two days later when I got home, I presented it to the patient. She accepted treatment, and it was a comprehensive, cosmetic case - a big, big case. I can't say for sure, but my feeling was had I not been able to show her what the restoration would look like using her own face with Smile Creator, her response may have been very different. We talk about motivational mockups and things like that, but before you even print the model to put the mockup in their mouth, show them the picture of themselves with that in there. That's what exocad is for me. That really opened my eyes. I thought, wow, I have been doing this for two days, and this has already resulted in a very big ‘yes’ from one of my patients. She's happy, I'm happy, and everybody's happy. What do people do who don't have this?

Q: Right. It may a take a moment to learn, but once you're in, you don't go back.

A: I'm still an infant with what the software can do, but it's still powerful even at that level. Many people are very visual, and if you can't show them, what you're talking about, it just doesn't have the same impact.

Q: Do you educate the patients about what you're doing? How much do you explain about the technology behind what you’re showing them?

A: We do a lot of education with the iTero. That's step one because it's so exciting for them to see their own teeth on the screen and be able to rotate the scan in 3D. Then I explain to them, I take this and put it in the computer program and design your new teeth on top of it. Then I can show them with the fade bar their current teeth to their new teeth. They’ve seen me work through the DentalCAD program in front of them. I think they appreciate the technology and the capabilities when they see it that way.

For me, it worked best to sit in a class with people who knew how to do everything and to have them show me.

Q: Was cost a factor at all for you when you were making your investments in digital workflows?

A: I think there's expense in anything that you do in that kind of space. If you're turning it around and getting acceptance on big treatments, it pays for itself rather quickly. I would say don't hesitate from an expense side of things. I just think you need to have some patience, and you should invest in the education side of it. There are some people out there who can sit down and learn everything they need from YouTube, but for me it worked best to sit in a class with people who knew how to do everything and to have them show me. Otherwise, I would have been intimidated.

Q: Time for some fun questions. Manual or electric toothbrush?

A: Electric. I’m using a new one that's so much better than any other electric toothbrushes I've ever had. It sounds corny, but it’s really a game changer.

A: Since March, my passion has been this practice because I think if you're not passionate about growing and creating something that's worth having, then you're probably not going to have it. But I also have two little boys. When I opened this business, I told myself I’m not going to work all day and night. At the end of the day, I shut everything off and go home. I would say my real passion right now is my five- and seven-year-old kiddos and my husband too.

Q: Do you have a favorite tooth?

A: Number eight because my oldest son is getting his two front teeth in right now. Eight is in the lead, and it’s massive.

Q: One word for exocad?

Dr. Christina Pruitt grew up in a rural town in western Nebraska with a passion for helping people in the community. She received her undergraduate degree in psychology from Creighton University and then went on to the UNMC College of Dentistry to obtain her dental degree, graduating with high distinction in 2010. After dental school, she was accepted into an Advanced Education in General Dentistry Residency (AEGD) through the United States Air Force, where she spent 4 years in active duty service to our nation, taking care of our service members and veterans.  The AEGD allowed her to work alongside all dental specialists and hone her dental skill set. In constant pursuit of education, Dr. Pruitt has since been in private practice and spent hundreds of hours at the prestigious Kois Center learning advanced evidence-based dental diagnoses and treatments.  She is also a member and accreditation candidate in progress with the American Academy of Cosmetic Dentistry (AACD).  The AACD accreditation process is rigorous, and Dr. Pruitt has nearly completed the required cases to receive this distinction! She incorporates her desire to help people with advanced education and artistic talent to provide the best possible outcomes for her patients.  She is especially enthusiastic about implants, Invisalign, and cosmetic dentistry! Outside of the office, Dr. Pruitt enjoys spending time with her husband, Chase (who is also a dental professional—oral surgeon), and their two boys.  Her hobbies include golfing, cooking, reading, fitness, and travel. Keep up with her latest work on Facebook, LinkedIn or Twitter.

by Caitlan Reeg
Writer at exocad

Caitlan Reeg spends her days telling the world about the innovations her colleagues create. She’s passionate about healthcare, technology, and the ways the two interact to improve our lives. A former journalist, Caitlan has worked on staff at Dow Jones Newswires in Frankfurt and at the national public radio program Marketplace in Los Angeles.